skip to main | skip to sidebar

Are you excited about next Saturday? We certainly are...it's the annual Down syndrome Outreach Buddy Walk!

Whether you have Down syndrome, know someone who does, or just want to show your support, come and join the Buddy Walk. Anyone can be a buddy!

The event is being held at Maritime Heritage Park in Bellingham, WA and will include lots of FUN! Please call 360-715-0170 for more information.

See you Saturday!
Posted by The Arc of Whatcom County at 8:12 AM 1 comment:

"We Have Human Rights" Handbook

In 2007, the United Nations passed a law: people with disabilities have the same rights as everyone else.

To learn more, there is an accessibly written and designed "mini manual" just for you! This manual will support persons with developmental disabilities (self-advocates) wishing to do human rights education and advocacy work. We can use it to not only learn about our basic human rights, but also to teach others about these rights.

Posted by The Arc of Whatcom County at 11:54 AM No comments:

On July 24, 2009, President Obama invited disability advocates to the White House to celebrate the 19th anniversary of the ADA (Americans with Disabilities Act). Chester Finn was there representing SABE, Self-Advocates Becoming Empowered.

During the celebration President Obama announced that the United States was signing the United Nations Treaty on Rights for People with Disabilities.

“Disability rights aren't just civil rights to be enforced here at home; they're universal rights to be recognized and promoted around the world,” President Obama said. “And that's why I'm proud to announce that next week, the United States of America will join 140 other nations in signing the United Nations Convention on the Rights of Persons with Disabilities -- the
first new human rights convention of the 21st century.”

Read more thoughts and photos from Chester Finn by clicking HERE.
Posted by The Arc of Whatcom County at 11:16 AM No comments:

You have earned it!

"The right to play on any playing field?
You have earned it.

The right to study in any school?
You have earned it.

The right to hold a job?
You have earned it.

The right to be anybody's neighbor?
You have earned it."

The Arc of Whatcom County's entry in the 2009 Ski to Sea Parade was quite a success! Lots of dedicated people, fun balloons, spirited signs and celebration of inclusion!

Thanks everyone for making this happen. We are looking forward to the 2010 parade, and we hope to see you there! 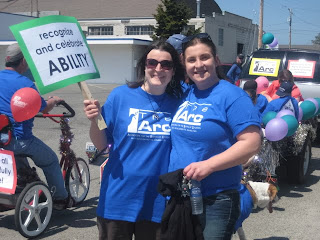 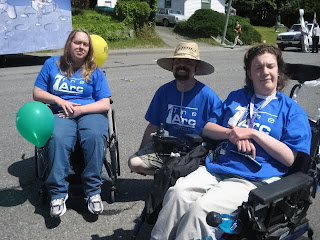 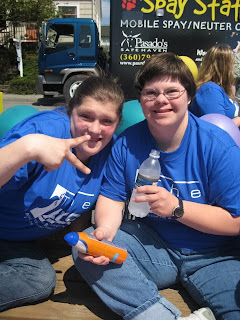 Posted by The Arc of Whatcom County at 7:16 AM 1 comment:

Self-advocacy is letting others know what you need and want, but also being responsible to work to help yourself and others.

Through our Youth Self-Advocacy meetings, we help individuals with developmental disabilities gain tools and confidence to communicate and build relationships.

Our goal is to support young people as they continue to create effective relationships where all members can learn, participate, and contribute as individuals and as part of a larger community.

Please note: Participants must be 18 to 25 years of age and eligible clients of the DSHS*/Division of Developmental Disabilities.

Upcoming meetings for the Youth Self-Advocacy Group of Whatcom County:

The meetings are held from 10am-12pm at The Dan Godwin Community Center.

* This meeting is in an accessible location. For sign language interpreter service, assistive listening devices or a communication material in alternative format, large print or audiotape, please call 10 days in advance @ (360) 715-0170.


The Arc of Whatcom County